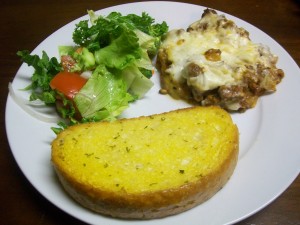 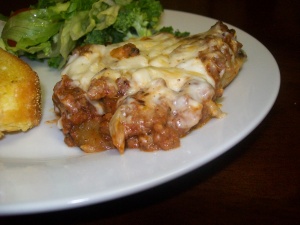 Tonight’s dinner was Moussaka, yet another recipe I found at Ten Dollar Dinners.

Moussaka is basically an eggplant casserole.  Its’ main ingredients are eggplant, a tomato sauce and meat.  This recipe is a greek variation of Moussaka, with potatoes layered on the bottom as an additional frugal filler.

To me, bechamel tasted basically like gravy.  Preparing it just made me want to throw it on some biscuits and dive in!  My son-in-law’s grandfather refers to gravy as “365”, because especially in Texas and from those of his generation, none of the 365 days of the year would be complete without some gravy!  Anyway, bechamel is basically a gravy with nutmeg.

The one slightly strange thing about this recipe is the addition of nutmeg and cinnamon.  I’ve never been a fan of “pumpkin pie ingredients” being added to savory dishes.  I did, however, include it as per the recipe.  Adding it to the meat sauce actually made the flavors jump.  It really was good!  Adding it to the Bechamel, however, was not for me.

As one son put it, it tasted like “dessert”!  The other was fine with the “mysterious” ingredient until I gave it a name:N-U-T-M-E-G!  At that mention, he then decided he would hold his nose through the rest of the forced dinner.  I’m of them both for surviving dinner!  The hubby and I both agreed that it would be better without the nutmeg, but still was delicious.

Variations I made to the recipe were:  1)  I got a little nervous that my dish wasn’t big enough for all the layers, so I decided to make it in two different pans.  As a result of that, I doubled the meat sauce ingredients.  2)  Online comments about the recipe said that many times it was too wet, so I reduced the milk to 3 cups, instead of 4.  This seemed to work great.  I did not double the Bechamel recipe…just split it in half between the two dishes.  3)  I don’t have wine in the house.  I did have red wine vinegar, however, and chose to use it, along with some water to reduce in the meat sauce.  4) I used Italian seasoning instead of dried oregano — close enough 😉

Other comments about the recipe included making sure to use freshly, grated parmesan cheese — in the tub, not the plastic shake bottle.  Also, there were complaints about the preparation time and clean up.  The recipe says 15 minutes Prep Time, but actually it was more like 30 minutes.  Clean up is also a little much, as you can tell by my kitchen: 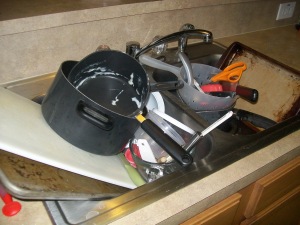 It wasn’t too bad, though.  Within about 15 minutes of placing the dish in the oven, I was able to make a salad, prepare the garlic toast, and get the sink back to this 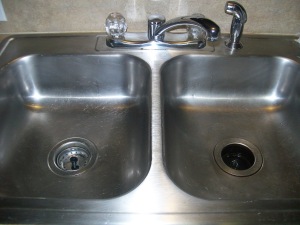 What I really, really like about this recipe though is to say it’s name:  Moussaka!  Moussaka!  Isn’t that fun?!  It reminds me of “The Lion King”…Mufasa! Mufasa!